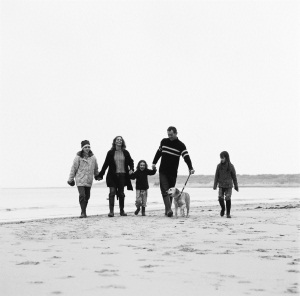 In many constitutions it is clearly stated that men and women are equal, thus should be treated equally, have the same rights and opportunities. In our world the standard for families is formed by a man, a woman and a child, but due to increasing rights for non-heterosexual peoples in society, we can observe changes in requests and laws. The so called “Rainbow Family” is an example of homosexual or bisexual couples raising a child. The issue of bi- and or homosexual has to be distinguished, as bisexual couples are capable of raising their own children, having brought this child from a former heterosexual relationship or intercourse, whereby homosexual couples are only left with the option to adopt an infant, which is then not their biological child. But not to leave this case out; Lesbian couples sometimes make the choice to be fertilized by going to a sperm bank, or having a test tube baby, which is also an option for heterosexual couples incapable of getting a child through their normal sexual activity.

The right to raise a child is different to the right to have a child. If a child is a product of the common way of reproducing, questions about the right to raise a child are not asked. Problems only arise, when parents start abusing or not giving adequate treatment to their junior. When wanting to adopt a child, barriers are set much higher, and adoption is mostly tied to certain standards. In Germany it is required that the age difference between the child and the adult should not exceed more than 40 years, and in many other countries mostly heterosexual couples are preferred, leaving singles with a lesser chance, and homosexual couples with no chance, unless one partner adopts, and the other is just seen as the partner of the single parent, although they are not single. (At this moment in Germany for example, adoption for homosexual couples is restricted to one partner, but the parliament is pushing to the equal adoption for same-sex couples, the way it is for opposite-sex couples, towards 2014.)

Many constellations have been existing already, but there has been no word for it, no support from the state, and no equality in treatment.

Officially setting a standard of equality will not lead to more same-sex marriages, as same-sex couples are already living together without a marriage certificate; it will not attract more peoples to live as homosexuals, as peoples are not made homosexual, they are like that naturally since birth. (Absurd statements from peoples saying one can make peoples gay, should ask themselves, as heterosexuals, if they could have been turned gay, and if they have that deep routed angst, they may question themselves of maybe having bisexual tendencies which they may fear, and then projecting this fear onto others. I can clearly say, that I was never influenced, nor had to make a choice whether to be gay or not, because I felt it and knew it myself)

The next problem with having no equality, is that if same-sex couples separate or divorce, depending on the legal situation of the country they live in, the right to take care of the child, or even just to visit it, is only with the one who adopted it, or brought it into the community. This takes away the right of the child to see one of the partners it grew up with before.

Further we also have to look at heterosexual couples who are married and don't have children at all. These couples enjoy even tax abatement, just because they are married, and although the conservative defenders of the traditional family, say that the community of man and woman, leading to offspring, must be protected exclusively. This argument limps, as the defenders of the up-to-date family constellations, with no word, reject or criticize the traditional family systems, as they are of course the common way of family founding. There is just nowadays a need to adjust or improve the conditions for all natural life styles, as they have been always hidden and at the edge of societies. Equality does with no millimeter threaten the traditional family, but it just makes visible what has been practiced in compromise already.

Treating peoples and minorities who are not conform or the same like the majority is of course a form of discrimination, and the motto, unequal must be treated unequal, when the natural slogan should be that the unequal should be treated equal. In the past women were treated unequal, handicap peoples too, and today, not all over the globe yet, we do not think about that anymore.

Inequality is something being present, and it takes often very long to remove, through regimes, cultures and religions. As long as religions try, or even succeed, to have political influence, equality issues, in fact just basic Human Rights, will have tough times pushing things through. As long as religious representatives voice out illogical phrases like “Same-sex couples jeopardize and even threaten the entire human race”, and peoples belief such nonsense, it is a stony road to success.

The 21st century is on a better path now, and all roots laid in the end of the 20th century and turning into many fruitful streams.

Being a strong supporter of equal rights, I still have to say that to raise a child should be out of the wish to help another person in this world, who may not be able to enjoy a fair chance in the place it has come from. An adopted child should always be informed where it has originally come from, and if possible, who his or her biological parents are or were. As a gay man, I never had the wish to have own biological children, and I think it lays in the nature of the fact, that it is easy to accept being childless, as there is no natural way for having a child. Raising a child that is not ones own, is more of a humanitarian act, giving love and support to another human being, leading to a brighter future for the child having adopted.